Smoking around hospitals, and around patients has long been a topic of debate for people, but MP’s in parliament in Scotland have finally started to make history by setting into place a new law. This law will in fact stop smokers from being able to smoke in some areas of hospital grounds. The new bill will see the government legally enforcing bans on smoking a safe distance from hospital buildings and hospital grounds in Scotland. 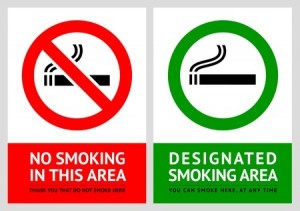 In the new bill they are making sure that hospital estates have no smoking areas, a smoking perimeter and just how large it will be is yet to be sorted out in parliament. A lot of questions have been put forward about just how practical this law will be, and the committee has questioned the feasibility of the approach that will be taken. It has however, been concluded that the bill will have unintended consequences of increasing compliance with other sections of smoking areas in hospitals because of the areas that NHS organisations have set up to allow smokers to actually smoke.

The new legislation will make smokers more aware of the places that are designated to them to be able to smoke. It has been debated a lot as people feel like at the moment smokers think that most areas of the hospital are off bounds to be able to smoke. However, with the new legislation it is making people aware that there are areas that they can still smoke in. It has been recommended that the NHS is able to set in force the areas that they want to be none smoking.

The conclusion was that the NHS should not allow smoking on their grounds as tobacco has a very poor impact on people’s health’s and it is best that a no smoking policy is set into force.
The parliament committee agreed that there is a very big issue with smokers being allowed to stand inside doorways and designated access points. As it is casing damage to people with second hand smoke inhalation, and making none smokers that are sick, and not sick, victims of having to inhale smoke from selfish individuals that choose to smoke because of their own addition to nicotine.
It was agreed that it is necessary for hospitals to be able to communicate with their patients and families of patients to make it known that smoking is dangerous, and that it is in fact going to be illegal to do so in some areas. Fines will be set into place and a complete overhaul of the system will be made with regard to smoking! The new bill that was set in place also means that the sales of nicotine vapor products, which are otherwise, refereed to as e cigarettes will be restricted, and it is evident that they do have a detrimental effect on health, despite being considered as a lower health risk option than your traditional cigarette. Just how the sale of these types of products will be restricted is yet to be discussed with more attention to detail, but one thing that remains sure is that this is very detrimental to the law being set into place.
The deputy governor Bob Doris has said that all you need to do is look around in the street and you will be able to see just how popular the e cigarettes have become, they are everywhere, and people both young and old can be seen with them! I Bob thinks that it is common sense to restart the sales of them, as with the sales of other tobacco products as well.
Despite the e cigarette market being viewed as a method of being available to help people to stop smoking, it was also decided that a lot of research is needed to clarify the safeness of such a product. Guidance is going to be offered and health and social organisations are going to have to take their role when the new laws are set into place!
One thing that is for sure is that the new laws will create a stir among smokers, none smokers will welcome them.